San Pedro de Atacama is a unique town in the Atacama Desert in Chile.  When I was planning my South American adventure, I didn’t know too much about it.  But then I stumbled upon this post from Be My Travel Muse, and I fell in love.  I dreamt of renting a camper van like Kristin did, and I made it a goal to find a few people to go in on it with me.  Unfortunately, this didn’t work out for me.  I was only in Chile for about one week before reaching San Pedro, and most of the travelers I had met were either finishing their trip or moving south to Patagonia or east into Argentina.  I could’ve planned to spend an extra few days in San Pedro hoping to meet other travelers to at least rent a car for a day, but since my initial 6 – 8 week trip was being trimmed down to 4 – 5 weeks I didn’t have the extra time to spare.  I had to settle for group tours, but if you ever find yourself in San Pedro I would recommend renting a car or camper van to see the sites yourself.

First up was a trip out to the Lagunas Escondidas, a group of seven small salt lakes in the middle of the Salar salt flats.  People are allowed to swim in the first and last of the lakes.  After a long, bumpy drive to the lakes, my group walked out to the last lake and jumped in.  The water was cool but not freezing, and since it was salt water I couldn’t really swim; it was more like floating!  I’ve never had that experience before, it was crazy!  I was literally running in place in the water, or just “standing” there, and my body would not sink.  It was fun to float around, until eventually the salt got to be too much.  I could feel it caking onto my skin, and when I finally climbed out of the water my skin was covered in salty residue.  I dried off and walked back to the first lake, enjoying the view along the way.  In the distance I saw mountains, and all around me was salt; there was so much that it almost looked like snow to me, but it was actually salt.  It was beautiful.  Once my whole group finished swimming, we traveled back toward San Pedro de Atacama but stopped outside of town to watch the sunset.  We enjoyed snacks and pisco sours, looking over the Valle de la Luna into the setting sun.  I felt present, and alive, like my whole body was absorbing the experience.  It was profound. 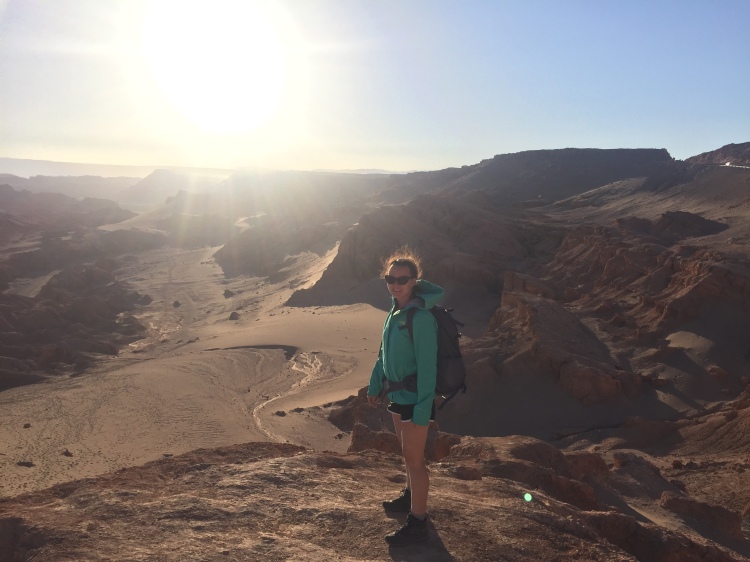 The next morning I woke up early for a day trip to the Lagunas Altiplanicas and Piedras Rojas.  Along the way to the lakes, we stopped in the tiny village of Toconao for breakfast.  Toconao was situated at 2,485 meters above sea level (8,153 feet), and the lakes themselves were over 4,000 meters (13,580 feet) in elevation.  To put that in perspective, Denver is located around 1,600 meters (5,300 feet) above sea level and Mt Hood is 3,426 meters (11,240 feet) high.  These lakes were higher in altitude than Mt Hood!  The Miscanti and Miñiques lakes were picturesque, with volcanoes towering above them.  After spending time on their shores we set off on another long drive to the Piedras Rojas, or Red Rocks.  Along the way we stopped to see vicuñas, which are wild animals that are related to llamas and alpacas.  Unfortunately we couldn’t visit the Piedras Rojas themselves, we could only view them from an overlook.  This area is sacred to the local people, and tourists have vandalized the rocks so now it’s closed to visitors.  This wasn’t ideal, but it was understandable considering the circumstances and they were still beautiful to look at.  After the Piedras Rojas, we stopped at Laguna Chaxa to see flamingos and then our guide took us to a small swimming hole.  I jumped into the water and watched the sun set while swimming there.

That night I ventured to a small bar in town for dinner.  While I was eating, karaoke started in the main room.  I was enjoying my drink and meal when a guy at a table nearby asked if I was eating alone and invited me to join his group.  I happily obliged!  I had a memorable dinner in Valparaiso, but this dinner turned out to be another of my favorite meals on my whole trip.  Nicolas, who had invited me, spoke English very well, but his friends were not as fluent.  That didn’t stop us from having a great time and communicating with each other.  I tried to speak in Spanish as much as I could, and they tried to respond in English as well as they could.  I even learned some Chilean slang and a few Spanish swear words!  It was so much fun. The group of friends were from another region in Chile, and it was great to get to know them in the little time we had together.  It was the first time on my trip that I felt I connected with someone, and it made me reflect a lot on the nature of traveling and the bittersweet reality of meeting people and saying good-bye so quickly.

The next morning I woke up insanely early for one of the longest days of my whole traveling experience.  I was in my hostel’s lobby at 3:30am waiting for a bus to pick up me for a tour to El Tatio geyser.  Honestly, this was one of the worst experiences I had in South America.  It was a long, cold ride to the geyser field.  Because of the high elevation temperatures were below freezing.  Our guide walked us around a few small geysers (more like steaming holes in the ground) before letting us roam for about a half hour.  We weren’t directed in any particular direction, so we wandered aimlessly before heading back to the bus for breakfast.  To sum up the morning- we didn’t see any geysers.  We were then led to hot springs to swim in, though they turned out to be more like lukewarm springs.  It was there that I learned there were actual impressive geysers that other groups saw, but our guide just didn’t take us there or tell us where to find them.  Months later I’m still a little bitter about this, but I keep telling myself that I’ve seen the OG geyser in Iceland from which all other geysers are named, so I’m probably better off.

After the disappointing and extremely cold morning we stopped in the tiny village of Machuca, which was my favorite part of the morning.  I saw my first llamas of the trip, and I even tasted llama meat.  It reminded me of steak, though a little more tough.  Once we got back into San Pedro de Atacama, I relaxed at my hostel for a while, then set off for my afternoon tour to Valle de la Luna.

Valle de la Luna- it was simply amazing.  It’s probably one of the coolest places I have ever been to.  Its name means “Valley of the Moon,” which is appropriate because the landscape looks like you’re on the moon.  We navigated through salt caves, saw giant rock formations called the Tres Maria’s, looked into a salt mine, and (the best part) climbed the great sand dune overlooking the whole valley.  It was incredible.  It felt like we were on top of the world, with sweeping views of the desert and salt flats all around us, and volcanoes in the distance.  It was awesome in the literal way- “extremely impressive or daunting; inspiring great admiration.” When we left the heart of the valley, we stopped outside of town to watch another sunset overlooking this incredible landscape.  This was my last sunset in San Pedro, and it was the perfect ending to a day that had started off in a miserable way, and also the perfect ending to my time in Chile.

The next day was my last day in San Pedro de Atacama, and Chile itself.  My bus to Calama (then to Arica, then Tacna, then finally Arequipa) didn’t leave until early evening, so I had a free day.  I set off to explore the town, and when I walked through the main square I saw the Wally tour grouping together and decided to join on a whim.  It ended up being my favorite Wally tour in Chile.  Our guide, Rene, was so friendly and knowledgeable about the town.  He led us to the main sites, but he also showed us different restaurants, ice cream shops, and cafes that cater more to locals than tourists.  He showed us trees and bushes with berries that we sampled.  He was so cool.  After the tour I joined him for a beer and lunch, and we talked a lot about where we have both traveled and where we wanted to go.  We ended up spending most of the afternoon together, just talking and enjoying each other’s company.  If I didn’t already have a bus ticket purchased at that time I probably would have stayed an extra night and gone to a party in the desert with him.

But my ticket was already purchased, so that evening as the sun set I was on a bus heading north toward Peru.  San Pedro de Atacama was a wonderful surprise to me- from my initial discovery of all the exciting things to do to the amazing people I had the chance to meet there.  I felt a sense of peace in that small town on the edge of the driest desert in the world, something I never would have anticipated.  Out of all the places I traveled to in Chile, it’s San Pedro de Atacama that stole the biggest piece of my heart.

Have you ever been to San Pedro de Atacama?  Have you had meaningful connections with other travelers or locals on a trip?  What places have you been to that mean something special to you?