It’s been almost 10 years since I moved into the fifth-floor dorm in St. Ann’s at Duquesne University, thereby claiming my first-ever Pittsburgh address. It was only a student address, but it was the first of many (nine, actually) that I would call home over the following decade. Ten years is a long time to spend in one city, and in a place like Pittsburgh it sometimes felt longer. The city had grown and transformed so much over the course of my time there; how is it possible that so much change was limited to just one decade?

On the flip side, though, ten years in Pittsburgh almost felt fleeting. College and your early twenties happen in a rush, a quick succession of moments that stand out bigger than anything else in your mind. Life, for me at least, was fast-paced and busy, almost like I was living perpetually in fast-forward mode. In the past ten years of my life there was a constantly changing rotation of people, bars, names, restaurants, songs, things to do, but the background of the blur was always the same: city lights on the water, black and gold everywhere you look, yellow bridges in a row, three rivers meeting at a point.

I turned 18 in a rural area about 40 miles east of Pittsburgh, a small community where I’ve spent the majority of my life. Technically speaking, that’s where I reached adulthood, but looking back it doesn’t feel like that’s where I really grew up. Growing up happened in Pittsburgh. Pittsburgh is where I stepped out of my comfort zone, tried new things, and made mistakes. It’s where I learned some of the most important things in life- how to take a tequila shot, how to use chopsticks, how to do a VLOOKUP in Excel, how to love someone, how to forgive, how to let go. Pittsburgh is where I became the person I am today, and in many ways the city has become a part of me.

Now, when people hear where I’m from, they ask me what Pittsburgh is like. They want to know how I liked it, which is honestly a vague and generic question. I’m always frustrated when the conversation comes to this point, because I have no idea how to answer. How can I talk about Pittsburgh without talking about my personal experiences? How can I summarize ten years into a few simple sentences? Do I talk about the way the city was when I arrived or the way it was when I left? How can I describe my love for Pittsburgh in the same breath as my overwhelming need to leave it behind?

Pittsburgh was walking across the 10th Street Bridge for the first time as a college freshman and feeling the excitement of life is about to happen. It was driving through South Side years later and remembering the houses by parties we once went to or friends that used to live there. It was going to Mario’s for gobs on Wednesdays and being annoyed that trivia was running over into the DJ’s time, and then evolving into the person who went to Mario’s for trivia and was annoyed by the college kids showing up for gobs. It was walking the one mile through downtown to the office where I had my first internship and wondering if my future resided in one of the skyscrapers I looked up to on Grant Street. It was the first apartment I lived in by myself that had basically no insulation but a floor-to-ceiling view of the sunrise over the Monongahela every day. It was the old man walking his dog that I said hello to every day when I walked the South Side riverfront trail after work. It was the dim corner in the parking garage downtown where I said “I love you” for the first time and meant it. It was fireworks exploding in the sky over the water, observed from the Point, from PNC park, on the rooftop of an apartment building, on a boat on the water, always surrounded by friends. It was rowing down the Allegheny on Wednesday nights as the sun set, counting the bridges as we passed underneath to the sound of “catch… release, catch… release.” It was the sound of the saxophone player on the Clemente bridge before and after every Pirates game. It was the way my stomach flipped when I heard that the restaurant where I went on my favorite first date was closing and feeling a sense of something bigger ending. It was driving through the Fort Pitt Tunnel and watching the city explode into view and feeling a sense of wonder every time. It was a glass castle dominating the skyline that represented both a job that held me down and people that lifted me up. It was the hundreds (thousands?) of drinks consumed over laughter and tears in every corner of the city- from South Side to Lawrenceville, from Shadyside to the North Shore, from Mount Washington to Bakery Square. It was the hundreds of people whose lives intersected with mine- strangers from Pittsburgh itself or from as far away as Norway or China; strangers that became friends and a special few who became something closer to family. Pittsburgh was life, my life, and ten years of it. 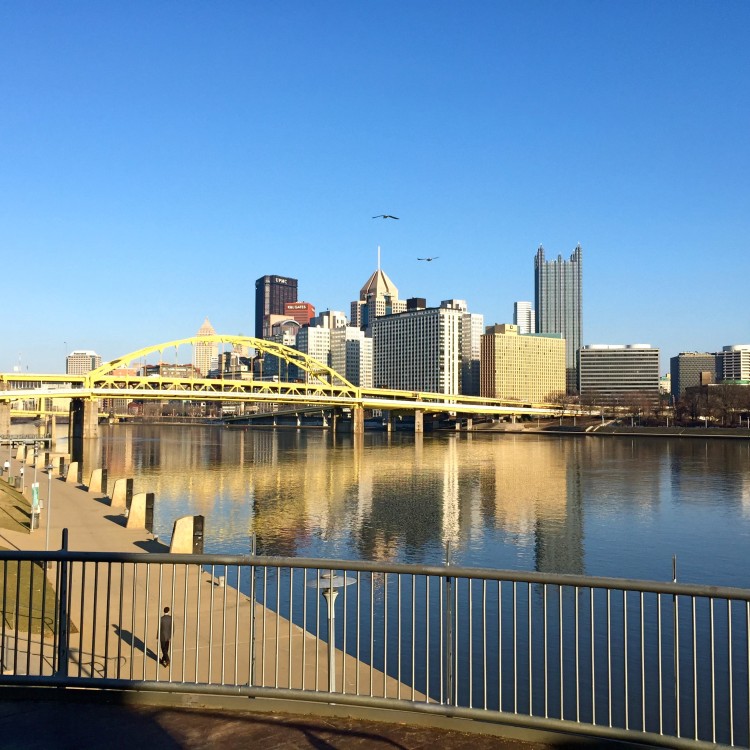 It was both good and bad, pretty and ugly. It was love, heartbreak, tears, and laughter. It was a mix of great and terrible ideas (some better or worse than others). It was learning and changing and growing. It was once everything, but now it’s not. It’s a memory, it’s my past. And I don’t think there are words that can give Pittsburgh the proper goodbye it deserves from me. So instead, I’ll move forward knowing that no matter how far away I go, or how long I stay away, I will always have the most wonderful city to go back to, whether it’s for vacation or a permanent move or just a stop on my way to somewhere else. I love you, Pittsburgh. Until next time.